After decades of tension between the US and Iran, the year started with a boiling point. Following heated exchange of accusations and attacks from both sides, this month marked probably the closest these two countries had been from going to war.

This uncertainty saw oil prices rise sharply initially, only to fall for the remainder of January. This was mainly due to the fact that (1) Iran’s oil production shortfall could easily be offset by Saudi Arabia and remaining OPEC members and (2) worrying news came from China…

Until the end of January, a yet unnamed virus began to circulate in China, but was largely contained within the country’s borders, which led to some apprehension but not too many reasons for excessive worry. However, this all changed when it became public that South Korea’s 31st confirmed case was responsible for the rapid spread of the virus, after being in contact with more than 1 000 people, including in hospitals and churches. 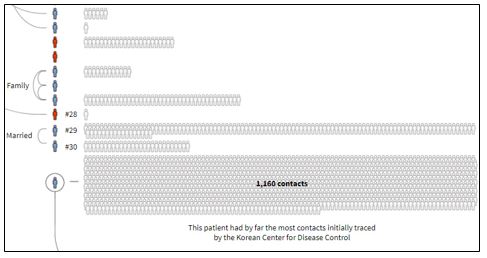 The impact of “Patient 31” on the spread of the virus compared to previous infections.

This event was a game-changer and warned the world for the worrying effects that a seemingly ordinary interaction could have on public health.

March saw the stock market get hit hard by the uncertainty of Covid-19. This crash was so staggering that, within 1 week, the Dow Jones Industrial Average index faced not one, but three significant crashes:

Tourism stocks were particularly hit hard, but the consequences were so severe that we witnessed systemic effects and a spread across the vast majority of sectors.

In a year full of “once in a lifetime” events, April saw oil prices turn negative for the first time in history. As the world was put on hold, oil demand was rapidly and significantly surpassed by the total supply in the market, which led the commodity futures to an historic mark of -$37 on April 20th, meaning that investors could actually get paid for taking on the physical delivery of a barrel of oil (and all the costs involved with it). 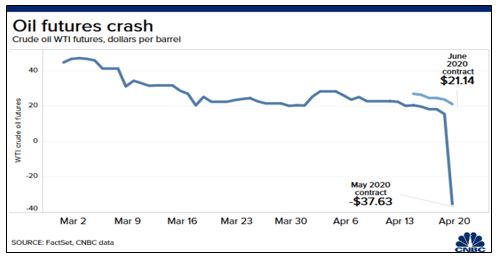 5) May and June: Stocks Recover 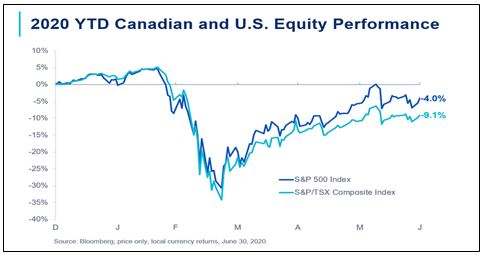 Driven by a historic (like most things 2020-related) stimulus package by the US Government and a global low interest rates environment, investors turned to equities on search for yields that were simply not shown in other asset classes that could act as “safe-havens” in times of uncertainty.

Amid all the uncertainty caused by the pandemic, one thing became much clearer: technology will help us keep moving forward. To understand the increasing impact of “Big Tech” companies (and also Tesla) on the current markets, below is a display of the weight of the 6 major companies on the Nasdaq 100. 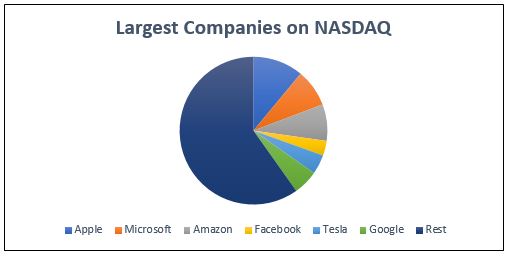 Currently, the “Big 5” (and also Tesla) are worth approximately 45% of the whole index.

If the Covid crash was an unprecedented one, the same cannot be said about the bear market that followed. Going back as early as the 1920s, the average bear markets that followed, endured for a median 300 days. However, this year, the S&P 500 was able to resume its upward trend after a 33-day bear market, making it the shortest on record.

With the world working from home, and families unable to meet in person, video chat apps quickly rose to become one of the fastest rising “niches” in 2020. The rise in users was so significant that by October, Zoom alone was worth more than Exxon Mobil, one of the world’s largest Oil giants. 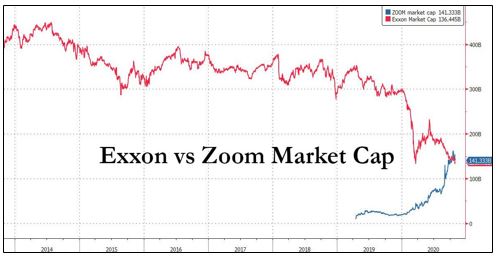 By October, Zoom shares had risen 658% Year-Over-Year, with Exxon losing around 55% in value.

An unprecedented year could not end without an unprecedented US Election. November marked the month of the highest voter turnout in an US Election since 1900, with President elect Joe Biden receiving more than 80 million votes, a record-high in American history.

It can be hard to be optimistic after such a dismal year, but I would like to conclude with a hopeful tone.

On December 8th, a UK citizen called Margaret Keenan became the first person in the world to receive the Pfizer Covid-19 vaccine and kickstarted what we hope to be a global and concentrated effort to leave this pandemic behind us. We can only wish and hope for very quick and visible results of these efforts, but it’s definitely hopeful to enter 2021 knowing that, once again, science was able to reach yet another milestone and produce a potential global solution in such an incredible period of time.

There will still be downturns and risks, as we are facing yet again another lockdown, but as history has taught us: this too shall pass. 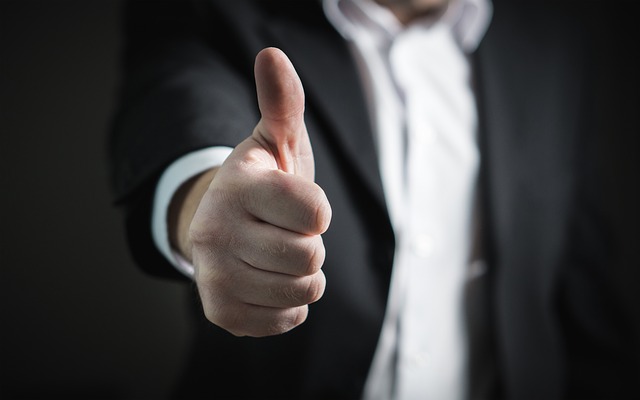 We are proud to announce that Blacktower’s Group Managing Director, John Westwood, is featured on the International Adviser – IA100 list “The Industry’s Most Influential”.

The value of local advice for South African expats 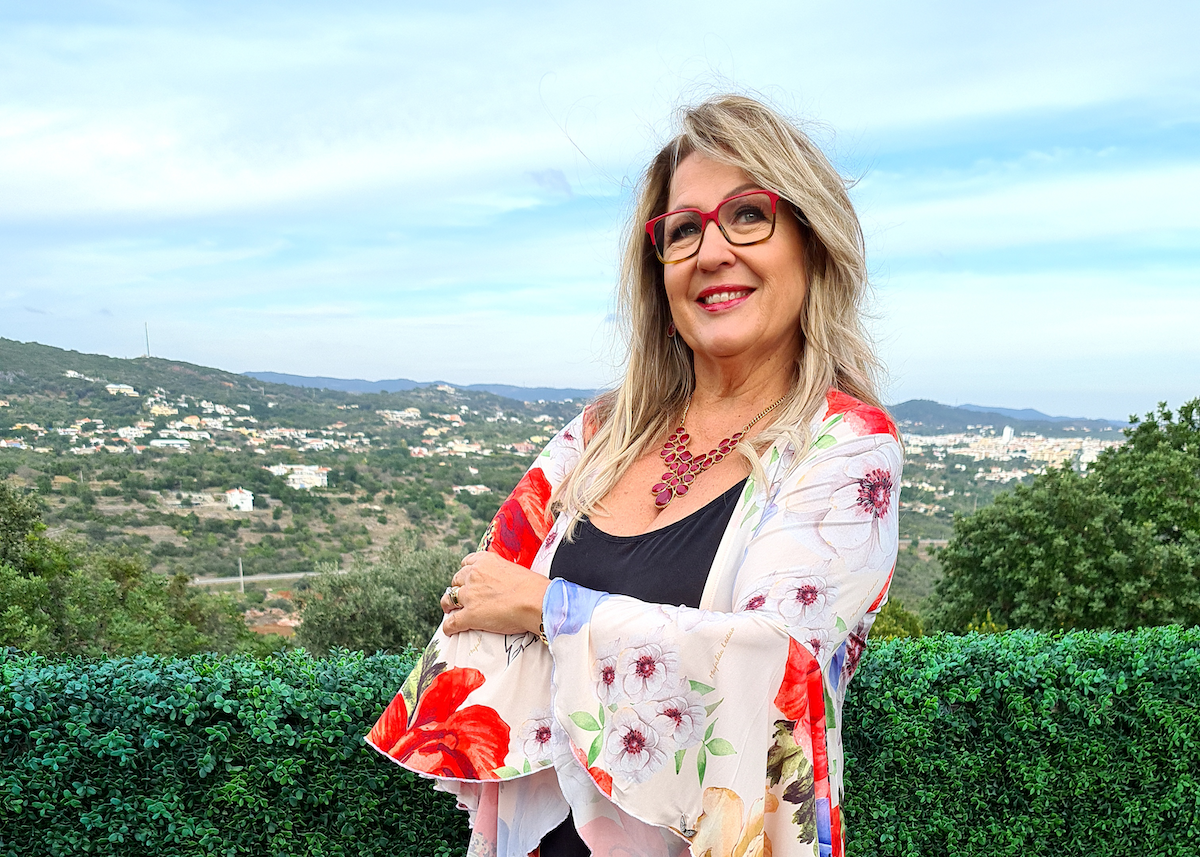 Over the years, the trend for South African nationals to seek out new lives and experiences in Portugal has continued to grow and grow; I myself made the move back in 1988 as a fresh-faced economics graduate from Witswatersrand University in Johannesburg, and I’ve never looked back. It’s easy to see the appeal for South Africans – the year-round sunshine and vast expanses of Atlantic coastline are a familiar part of daily life, just as they are back home – but the secure location and easy access to the rest of Europe is something really special. Being as there’s over 11,000 KM of distance between the two countries, a mere 12 hrs by plane give or take, there are going to be some big differences in the way of life, even if there are those obvious similarities. It’s probably advisable for any emigrant to arrive armed with a willingness to accept how things are done in their new home country rather than try to carry on as before and hope for the best. This is never more true than when dealing with your finances.